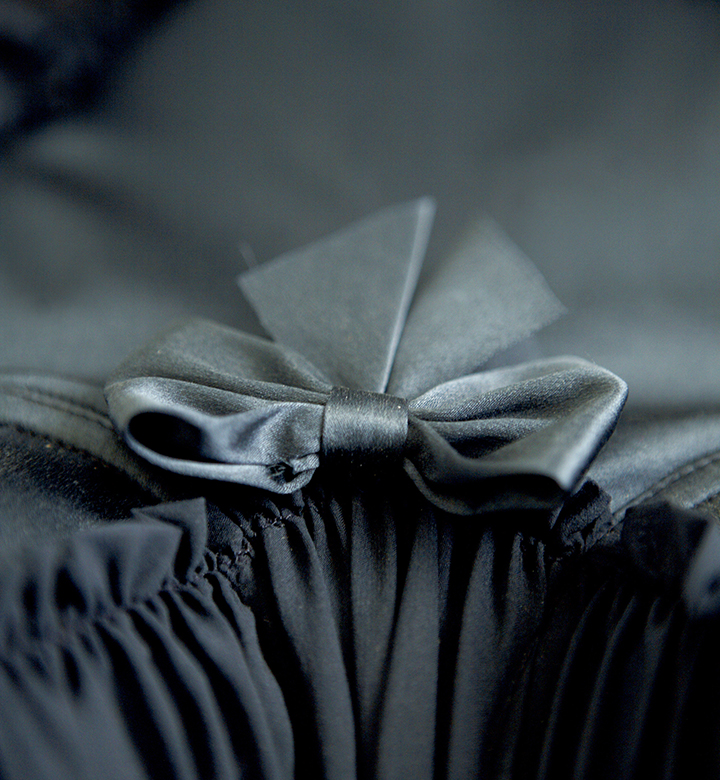 As a lingerie subcontractor, Macosa manufactures day and nighttime lingerie as well as corsets for the top brands.

A fitted, one-piece garment that offers a certain support. It usually closes at the crotch with snaps or hooks-and-eyes.

Generously covers the hips and buttocks

Underwear that generously covers the hips and buttocks. longer than briefs since it has legs

Similar to a waist-cincher, but cut straight at the bottom front.
Some models have removable garter straps

It is characterized by a feminine lacing in back that can be adjusted as desired. It is usually in a thick knit and structured by fairly stiff boning. Some models have removable garter straps

Guarantees a flat tummy thanks to a reinforced abdomen. It covers the buttocks and continues to the waist

This seductive piece of lingerie is usually worn with stockings instead of pantyhose, but sometimes the garters can be removed. These are attached in line with the front seams to create a visual harmony. The waist cincher molds the silhouette firmly thanks to its rigid, inner boning to give more feminine curves

Unlike a tanga, this model reveals the buttocks and comes up higher at the waist

Any of the previous cuts can be made "invisible" in thin, smooth, discreet fabrics with seamless or laser-cut finishings and subtle colors

The fabric pieces on the sides, back and crotch of a thong are as thin as a piece of string, thus the French name "string"

This nighttime lingerie flatters feminine curves without revealing the body

A straight, fitted cut on top of the thighs legs plus wide, horizontal elastics. The classic panty covers the buttocks completely and stops at the hips

A piece of lingerie that circles the waist and usually attaches in back. Its purpose is to hold up stockings with garters positioned at the tops of the thighs

A garter belt that holds in the waist thanks to a lingerie piece that rises up higher. The garters on a waist-cincher can be removed so it can be worn simply to mark the waist. Some women wear it as clothing

Cut that covers the bottom

Thanks to its sufficiently wide front, maternity panties give the tummy room to grow without being restricted

Cut that covers the back

Contains cups with pockets to hold the implants. It helps rediscover natural sensations and not feel the implants

This is the most classic bra with underwire under the cups and structured cups that cover the breasts. Sometimes also referred to as a "fitted bra"

The cups on this model are usually made in three pieces of fabric.
The lower piece has a vertical seam to emphasize the curve of the breast while the upper part lightly covers the top part of the breast

Bra with molded or pre-shaped cups

The fabric is shaped by a heat-pressing technique. The seamless cups are comfortable and offer a natural look

This bra, with no straps, bares the shoulders. The bra is sold with "removable" straps that may or may not be worn

The crop-top brai s typified by the absence of underwire and a specific cut of the cups.
It envelops the top of the breasts in a molding knit and is often elasticized at the bottom for better hold. The amount of support varies depends on the knit's structure

Sometimes also called a demi, this cut reveals the upper part of the breasts and defines a pretty curve at the top thanks to a vertical seam on the cups

Has a system for opening and closing the cup

With its evolutive concept, it adapts as the breasts develop and provides efficient support

Good hold lets the skin breath and provides for easy movement. Some models have hooks to attach a heart-rate monitor or a back pocket to hold a small water pouch

The cups on this bra are conceived to perfectly hold full breasts. The straps are wider, the back better distributes the breast weight, the knit fabric of the cups is usually lined and reinforcement tabs are often found on the sides. The "Minimizer" is an extra-hold bra whose technical conception distributes the bust to give the impression of less volume

Exists in all cuts. Characterized by thin, smooth, discreet, close-to-the-body fabrics and seamless finishings.
Some cuts are already supposed to be invisible such as bras referred to as "molded". Many invisible bras offer multi-position straps that can be worn normally, criss-crossed in back or attached around the neck

This bra diminishes the bust's size with an optical effect

The "plunge" cut offers a deep V decolleté and brings the bust's volume to the center.
It is ideal under V-neck tops so the bra is invisible.
Many "plunge" models offer removible pads

This cut is conceived to give the impression that the bust is bigger (it adds curves to small busts).
Even the cup structure gives this visual image. Many models also have removable pads made of foam rubber, micro-beads or silicone.
The latest trend : the "progressive push-up" integrates a thin, discreet, curved foam rubber inside the lower part of the cup

In this bra, the breasts are modeled by the special design of the cups

This cut has triangle-shaped cups ...
"Wirefree bras" are often triangles but some triangle bras do have underwires

Designed not to cover the buttocks at all

Designed not to cover the buttocks at all